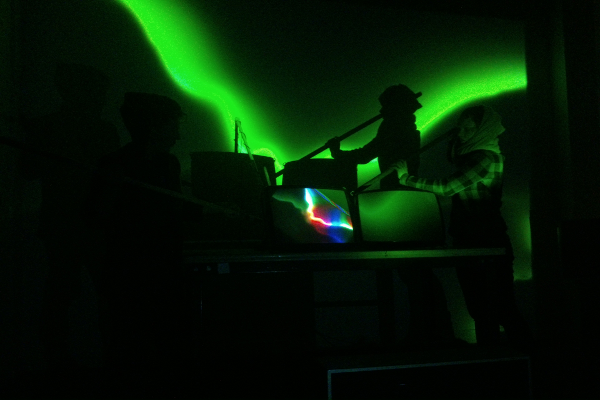 During the Space Science in the Arts course at the ArtScience Interfaculty in The Hague, the students Nicole Urban, Luc Dirkx, Philip Vermeulen, Yaprak Sayar, Bardo Frings,  Stefano Murgia and Marit Mihklepp bundled forces and formed the collective ‘Virrvarra’.

The group decided to work with the theme of the aurora borealis, the phenomenon of magical light curtains that occur around the polar regions of the earth, and are also commonly known as the Northern Lights. As Virrvarra the students experimented with different ways to evoke an aurora borealis experience.

For TecArt 2014 they present a synthesis between computer generated visuals and old televisions manipulated by strong magnets. These visual elements are combined with immersive soundscapes created from electromagnetic fields that are sent out by tiny little gnomes residing in the television tubes.